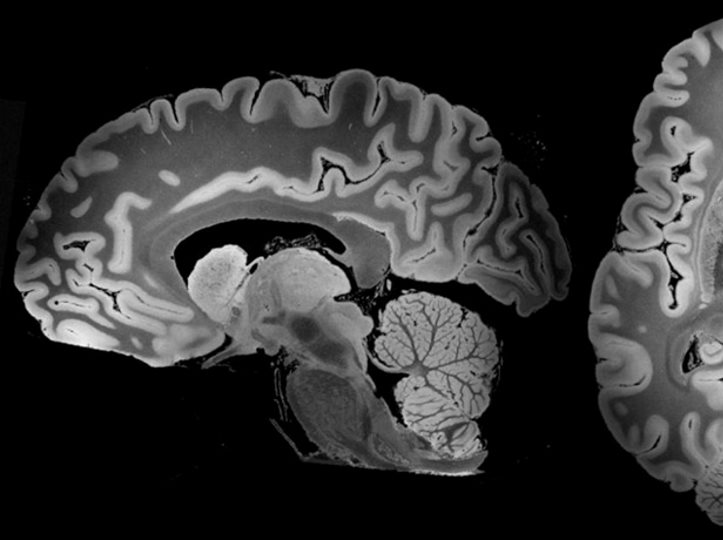 Over 100 hours of scanning has yielded a 3-D picture of the whole human brain that’s more detailed than ever before. The new view, enabled by a powerful MRI, has the resolution potentially to spot objects that are smaller than 0.1 millimeters wide.

“We haven’t seen an entire brain like this,” says electrical engineer Priti Balchandani of the Icahn School of Medicine at Mount Sinai in New York City, who was not involved in the study. “It’s definitely unprecedented.”

The scan shows brain structures such as the amygdala in vivid detail, a picture that might lead to a deeper understanding of how subtle changes in anatomy could relate to disorders such as post-traumatic stress disorder.

To get this new look, researchers at Massachusetts General Hospital in Boston and elsewhere studied a brain from a 58-year-old woman who died of viral pneumonia. Her donated brain, presumed to be healthy, was preserved and stored for nearly three years.

Before the scan began, researchers built a custom spheroid case of urethane that held the brain still and allowed interfering air bubbles to escape. Sturdily encased, the brain then went into a powerful MRI machine called a 7 Tesla, or 7T, and stayed there for almost five days of scanning.

The strength of the 7T, the length of the scanning time and the fact that the brain was perfectly still led to the high-resolution images, which are described May 31 at bioRxiv.org. Associated videos of the brain, as well as the underlying dataset, are publicly available.

Researchers can’t get the same kind of resolution on brains of living people. For starters, people couldn’t tolerate a 100-hour scan. And even tiny movements, such as those that come from breathing and blood flow, would blur the images.

But pushing the technology further in postmortem samples “gives us an idea of what’s possible,” Balchandani says. The U.S. Food and Drug Administration approved the first 7T scanner for clinical imaging in 2017, and large medical centers are increasingly using them to diagnose and study illnesses.

These detailed brain images could hold clues for researchers trying to pinpoint hard-to-see brain abnormalities involved in disorders such as comas and psychiatric conditions such as depression. The images “have the potential to advance understanding of human brain anatomy in health and disease,” the authors write.